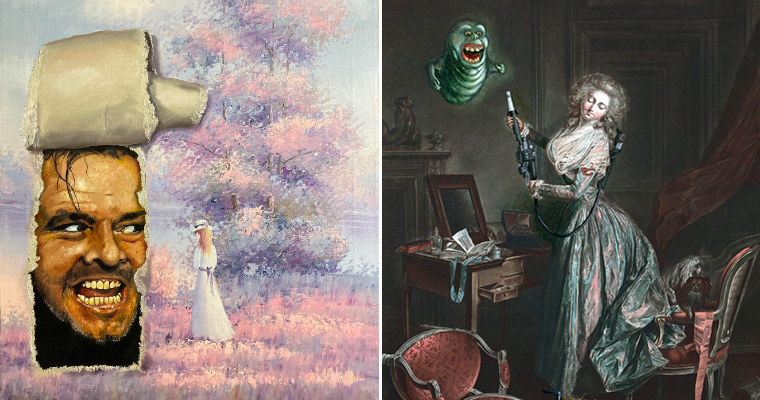 I find it interesting the many of these works depicts icons of millenial’s pop culture. I like the idea of painting over crappy paintings, but I don’t like these pop culture references. It tells you a couple of things: these products are targeted to millenials, and this is a shame, because in this way you authomatically limits the audience that can appreciate the idea standing behind these re-works of art. The photobombing cow is better because is general. For example also the idea of placing the characters of “King of the hill” in the bar setting is good, but why using those characters, and not just some “regular” characters? This leads to the second main consideration: millenials are considered morons by grown ups and by other millenials themselves. If an artisti does not reference something “millenialish”, millenials wouldn’t have a clue of what is all about. Are we serious? Or, maybe more depressingly, these pieces of art are simply market products, to be easily sold to millenials. Paint a Star Wars character, and presto, you have an easy sale. This quickly leads to the main theme “what is art, what is not”, which is not the point of this consideration. The point is: stop using cheap references taken from lousy cartoons! Be creative of your own! Create the future new big cartoon hit, instead of recycling the (shitty) cartoon hits of others. Maybe the cultural orizons of many people will slightly expand.