Towards the end of the new season of Netflix’s The Chilling Adventures of Sabrina, Sabrina Spellman, the teenage witch of Archie Comics fame, finds herself hypnotized by a vampire. “You’re going to let me drink your blood and feast on your flesh, aren’t you?” he whispers. He bites into her neck, but his mouth starts foaming uncontrollably. “My father was an angel, I have his blood,” she explains. “Also, consent. It’s real.”

This is what makes this Sabrina so wildly different from its previous iterations: It’s intense, dark, and, despite its 1960s origins, very much reflective of our turbulent times. Today’s Sabrina, played by Mad Men‘s Sally Draper herself, Kiernan Shipka, lives a hectic life in fictional Greendale, constantly trying to protect her loved ones from danger. “It’s become second nature for her to be this warrior,” Shipka says.

The series begins with Sabrina as a half-witch, half-mortal, until she signs her name in the Book of the Beast to become fully immersed in witchcraft — and learns that her biological father is, uh, Satan. Now, she battles demons and casts spells, while still finding time to cheerlead and get caught in a love triangle with mortal Harvey Kinkle and warlock Nicholas Scratch. (Or “Habrina” and “Nabrina,” as hardcore CAOS fans call them.)

With the first half of Season Three (technically “Part Three”) streaming this month, Shipka hopped on the phone from Vancouver, where she’s currently filming Part Four, to talk about the series’ evolution, being a “woke witch,” and what the future may hold for Sally.

What do you think is the overall theme of Sabrina?
It’s funny to say chaos, because obviously that’s the show’s acronym, but I feel like that is the theme, these worlds colliding. In the first few seasons, we saw Sabrina try to separate her two lives, and it became increasingly impossible to do. I think that she’s finally surrendered to just living, but chaos ensues.

She’s grown up so much this season. At the beginning, she vows to rescue Nick from hell, and by the end, they have a dramatic breakup.
That was was so fun to film. Not in a ha-ha way, but in the emotional release. The entire crew was crying; it was very powerful and memorable. I think that this season is about Sabrina finding herself. In the first two parts, we rarely saw her not in a relationship. I mean, she broke up with Harvey around the ninth episode, and she was with Nick in a few episodes. So we really have never seen her accepting being alone — not meaning that she’s lonely, but that she actually has to rely on herself and not someone else. I think it’s a really powerful message, and it makes her grow up a lot.

When the show began, you described Sabrina as a “woke witch.” There’s even more of that this season, as she increasingly finds herself battling patriarchy. Is she becoming more militant?
I think in the first two seasons, justice was always on Sabrina’s mind. It was instinctual for her to stand up for people and find something wrong with everything. Which is not inherently a bad thing, [it’s] actually kind of beautiful thing. In this third season, she’s growing into that, but she walks the walk. She’s putting herself at risk a lot more for the people that she loves. She’s doing things to hopefully make the world — make hell — a better place. I think it’s a humongous step for her in that way. 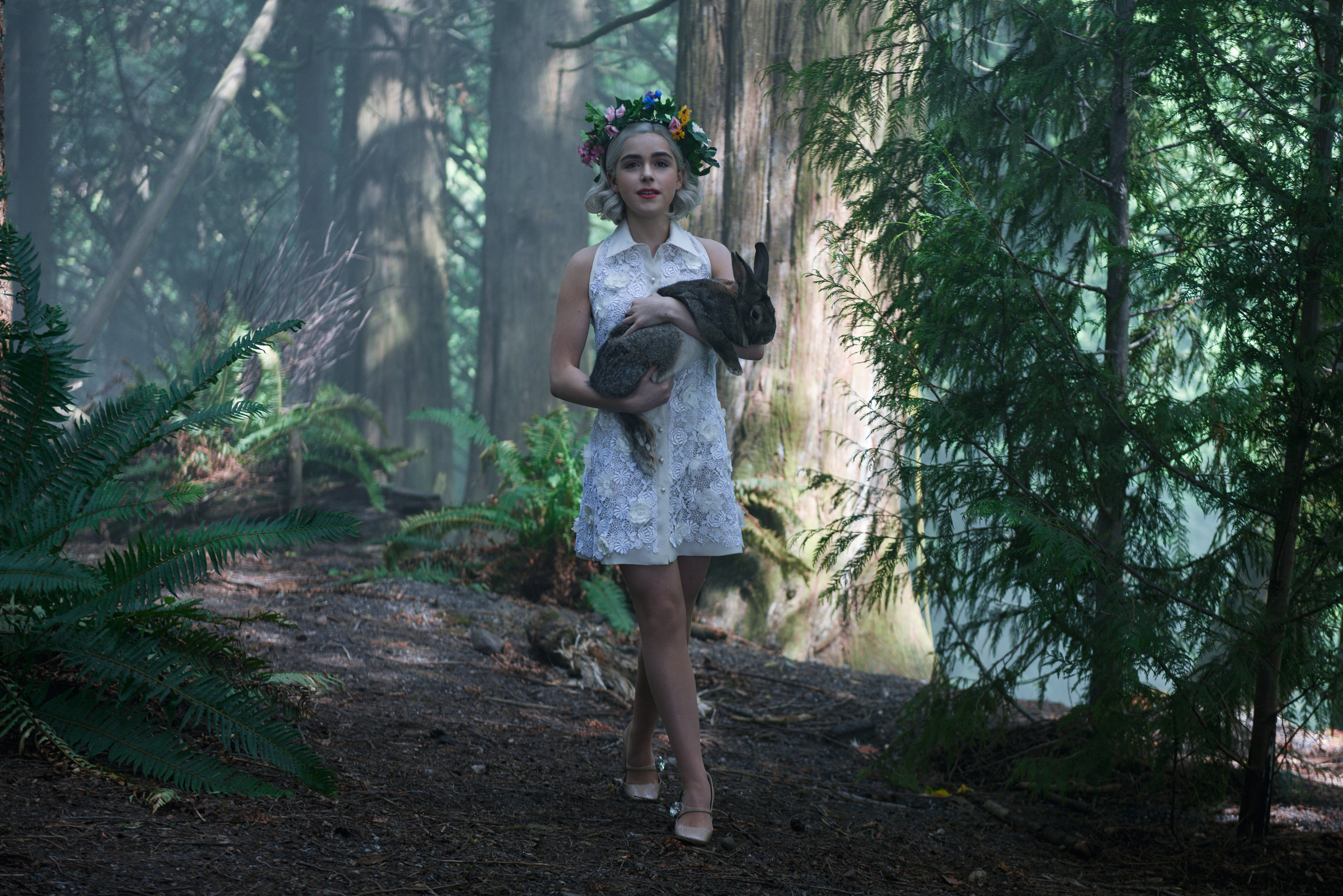 This season also introduces Caliban, a character who challenges Sabrina to take Satan’s place as the ruler of hell, but also ends up proposing to her. What do you make of their dynamic?
Caliban is really complex, and Sam [Corlett] does such a good job at making him an interesting, mysterious character. I can confidently say that we get to know him a lot better in the fourth part. There’s this immediate attraction between them, but also they’re fighting for the same thing, being pitted against each other, which makes it quite difficult. But there’s bound to be more than just Nick and Harvey in Sabrina’s life. That’s unrealistic. So I’m happy that writers went in that direction, and continue to lean in that direction.

In the Part Three finale, Sabrina splits herself into two beings, so that she can simultaneously be queen of hell and continue her life on Earth. What will Part Four bring now that there are two Sabrinas?
We’ve got a Parent Trap-style Sabrina situation. Without spoiling too much, it was an essential move to save the world, as one does when they are 16 [laughs]. But there are consequences as well — what [her cousin] Ambrose is talking to Sabrina about when he says “the cosmos will not like there being two of you” is exactly true. We definitely get to see a compartmentalized hell and Earth because of that. I’ve always seen Sabrina with this duality, so to have her split into two makes it more fun for me as an actor. I think that’s all I’m going to say, because I can keep talking about it. I get very excited.

What is the atmosphere like on set with the cast?
Very smoky [laughs]. There’s so much fog! Every single scene, there’s a lot of smoke for the look. We have to have a HEPA filter tent. You need some fresh air after being on set for a few hours.

But the atmosphere between all the cast is fantastic. We’re up here, and it’s this shared experience. We don’t really know anyone else, and everyone really loves each other a lot. It feels like college. Honestly, I haven’t worked with a cast since Mad Men that feels so tight-knit and close.

Do you guys ever interact with the Riverdale cast when they’re shooting in Vancouver?
We do, we’re all friends. I know Cole [Sprouse] and Cami [Mendes] quite well. We don’t see each other probably as much as we should. They have very similar schedules to us. But they’re a lovely bunch.

Do you ever think there will be a crossover between the two shows?
I would love that. If there’s anyone that wants a crossover, it’s me. I think our writers are brilliant enough that they could make it happen in a really fun way.

You have Wiccans on set to help with the witchcraft aspect of the show. How do they contribute?
It’s nice, because it feels like we’re not just making stuff up. Our practicing witches on set are not part of the Order of Hecate, but it’s not a fictional universe. It’s a much more grounded practice. It is nice to know the spells that we’re saying, the incantations, and the rituals are authentic and not fabricated. It’s comforting to feel like we’re doing it justice.

There was a lot of music incorporated in this season, with the cast singing and dancing. What was that like?
It was so fun. We all love music, and that’s what we do in our spare time anyway, so it’s nice to bring it to set. It’s very welcome in this kind of show where you’re fighting demons and everything is superdark. It’s nice to have a little bit of a break.

What music are you listening to these days?
I’m excited for the new Haim to come out. I like Cairo a lot, I’m kind of still stuck on that album. King Princess is very vibey. Frank Ocean is my ultimate, like absolute greatest. And I’m a Swiftie, I completely love Taylor Swift.

Did you see Cats?
No! But you know what? I actually was in a children’s theatre production of Cats, and I’m desperately trying to dig up the photos. Maybe Cats photos are a little too used at the moment, but I still feel like the internet could use one more.

Can you tell us about the cat that plays Salem?
Oh my god, it’s so funny. So we’ve got three: Boomer, Shaq, and Trevor. In the first season, Salem was such a fan favorite, we’ve learned how to incorporate him into the show in a meaningful way without putting too much stress. We don’t want them to be bombarded with material. They’re adjusting to fame, and it’s tough for them already, so it’s good to take it easy on them from time to time.

How would you compare Sabrina to Sally Draper?
I think there’s actually a lot of similarities. They’re both a bit sassy, and don’t put up with things that don’t sit right with them, and they’re both very independent thinkers. Sabrina’s life is obviously a bit more wild, but I think at the core, both of them are good people. And whole people. I really feel lucky that the parts that I’ve been able to play have been very fully-realized, fleshed-out female characters. Sally had so much depth to her. And I feel like Sabrina has so much depth to her. I’ve just been really lucky that I’ve fallen into these female-forward shows. Truly, it’s made me a better person. The fact that I’ve gotten to play these two very different but very badass characters has shaped me a lot.

Fans really want a Sally Draper spin-off.
Oh, I am there. Tell me where to be and go, let’s do it. I am so extremely down for that. It’s not even funny. I think it should happen.

Do you see her in the Eighties, following Don’s footsteps in advertising?
I’d like to see her a little bit earlier than that. I think seeing her mid-Seventies, exploring herself and getting wild and free, would probably be more fun and more different than what Mad Men was. We’re gonna have to ask Matt Weiner about that.